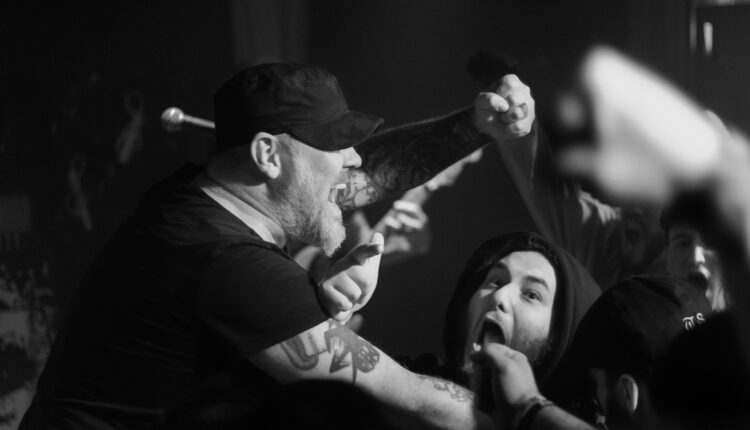 It was a dreary and dismal evening in the city of Rochester, the perfect setting for the return of one of the most incendiary and apocalyptic hardcore bands out there, Integrity. Integrity is currently on tour with special guests Vomit Forth, Soma Slumber, and Deal With God. Integrity was making its first stop in Upstate New York since around 2009, making this a rare appearance.

Starting off the evening was the upcoming Syracuse hardcore band Deal With God. Unfortunately, I did not get to the venue on time to catch their set but I found out that they will be playing at the Salt Space in Syracuse on April 8, so I am hoping to catch them there.

The next band to take the stage was the local Rochester deathcore ensemble, Soma Slumber. One of the best parts of going to shows is getting a chance to check out bands that I have not seen before. Soma Slumber did not disappoint. From the opening riffs, Mike Kilgannon commanded the audience’s attention with his intense stage presence. Backed up by Zane on guitars, Dakota on bass, and Ian pounding out the drums, the band hit hard with such songs as “American Disease” and “No Justice.” It was impossible not to thrash around especially with their version of the Cro-Mags classic “We Gotta Know/Show You No Mercy.” I enjoyed their set and the Cro-Mags cover, and hope to see them live again soon.

Hailing from the cold and icy northeast, brutal New England death metal band Vomit Forth was up next. From the moment vocalist, Kane Gelaznik hit the stage, the band pounded out a thunderous set of incredible heavy-laden tracks. With intense songs like “Torn Open” and “Seething Malevolence” the pit exploded into a mass of thrashing bodies. Backing up Kane was bassist Tyler Bidwell, Ricky Brayall on guitars, and Nick Herrmann smashing the hell out of the drums, together they produced a heavy and vicious sound.

Finally, the moment everyone at Photo City Music Hall had been excitedly waiting for, the return of hardcore legends Integrity. Originally established in Cleveland, OH in the late 1980s (Clevo-core) Integrity has forged not only an influential musical legacy but a dedicated and diehard fan base. What’s not to like about a band that has provided over thirty years of what fans have dubbed the soundtrack to mankind’s demise also known as the apocalypse.

After a brief stage set change, the intro seeped out of the speakers that were aptly draped in their signature skull logo. The anticipation was rising, and I could feel it building as the crowd pushed in closer to the stage. Dwid and the band exploded onto the stage tearing right into “Vocal Test” immediately followed by one of my favorite tracks, “Hollow” off their classic album Humanity is the Devil.

Since it has been so long since I had seen Integrity, I found it difficult to focus on taking photos because I am such a huge fan. I took some hits, kicks, and elbows, but I got the job done. If you have not seen Integrity live, it is an experience you will never forget.

From the opening notes through the final reverberations, vocalist Dwid Hellion mixed it up with fans who moshed, danced, and jumped on stage to sing along. The band tore through an incredible career-spanning setlist that ranged from older tunes such as “Rise” and “Abraxas Annihilation” all the way up to “I Am the Spell” off the latest album — Howling, For the Nightmare Shall Consume.

It was an impressive eighty-minute set and not only was Dwid’s performance nonstop and energetic, but I must take time to recognize the talented group of musicians who put so much into their music and live performances. None of it could have been possible without the talented Eric Little on the drums, Darkest Prince on bass holding down the low end, Justin Sexminn shredding on the guitar, and finally, Cody cranking out some killer leads on guitar. I was impressed with how the band maintained its insane pace throughout the performance.

The band took a brief break to tune up and then returned to the stage to find the crowd was still rowdy and wanting more songs. Dwid thanked everyone for coming out and mentioned that hopefully, they will be back sooner than the twenty-five years since they last played Rochester. I was completely ecstatic when the band ended their show with their intense and terrifying version of the classic Misfit’s track “Hybrid Moments,” a fitting tribute to one of the most iconic horror punk bands!

Once again, an amazing night of punk and hardcore at Rochester’s Photo City Music Hall. If you were looking to catch Integrity on their current tour, there are only a couple of dates left. It is a show you don’t want to miss.