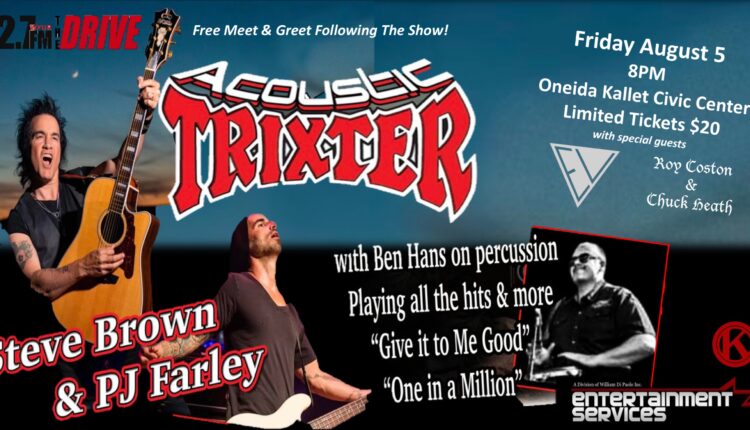 An evening with Acoustic Trixter is taking place Friday, Aug. 5 at the Oneida Kallet Civic Center. Trixter alum Steve Brown and PJ Farley will be joined by Ben Hans on percussion performing the hits from the ’90s rock band, including “One In A Million,” “Give It To Me Good” and “Surrender”. Doors open at 7:00 p.m.

Opening the show will be the Rome rock duo EV featuring Vito Daniello and Eric Cesari, followed by Roy Coston and Chuck Heath, for a night of up close and personal rock and roll. There will also be a free meet and greet Following the Show.

Brown is not only a master guitarist but an accomplished songwriter, singer, engineer,
producer, and performer. He has become one of the music industry’s most sought-after and
entrusted talents, In 2013, Brown was invited to be the guitarist for the legendary Def
Leppard, which led to him joining the band at the historic Wembley Stadium along with many
other arena and stadium shows thought North America. Steve also currently performs with
Tokyo Motor Fist, Danger Danger, Ted Poley, and many more.

PJ Farley joined Trixter in 1988 in time to record the band’s self-titled album which brought the
band three Billboard hits, “Give it to Me Good” “Surrender,” and “One In A Million.”
The band continued to record and tour throughout the next three decades. In addition to
writing and recording his own solo projects, Farley went on to have stints with Lita Ford, and
currently also performs with RA, Eric Martin (of Mr. Big), and is the bassist in Fozzy.

In 2021 Steve Brown filled in for Eric Martin and joined Eric’s Big Acoustic band of PJ and
Percussionist Ben Hans (Kip Winger, Eric Martin, Anthony Corder) for an impromptu
acoustic set opening for Warrant. Acoustic Trixter was born and the fans have been loving it.

Acoustic Trixter performs all the Trixter favorites as well as music written and recorded by
both Steve and PJ on their solo projects. Relive and rock out to all the Trixter hits, enjoy the great new tunes, and catch this energetic and entertaining show

LIVE: Halestorm, The Pretty Reckless, The Warning, and Lilith Czar at Lakeview Amp

LIVE: Stryper at The “L” in Horseheads